The legend of devil's paw 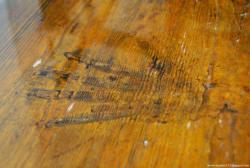 As any town with old history, Lublin has a lot of legends.  There is one scary legend consequences of which you can observe today. There is so-called devil’s paw imprint on the table of judicial Crown Tribunal in Lublin.  The print is in the middle of the wooden table.  It has smooth edges and when you look at it closely, you won’t see any trace of chopping on it. Imprint gives the impression that there was a strong hit with great force. But no living being can hit on a wooden table with such power. You can see this old table with devilish palm’s imprint in the museum of the Lublin Castle.

Learn more about the legend of devil's paw which was inspiration for us to created our section logo!

The legend of the devil’s paw imprint

Many years ago, in 1637, in a village near Lublin lived a widow with three children. They had a house and a fertile land, though it was difficult for a woman to do all the work, she was able to make a living.

Once a nobleman, who was the  owner of the nearby lands, sent his servants to the widow.  They announced the widow that their lord would buy a house and a field with farm buildings. That suggestion could be interesting for the widow, but the lord offered such a small amount of money, that it would be impossible to buy even a small house. The widow refused to sell her property. A few days later he sent his servants to the poor woman again.  But that time the lord offered even lower price. The widow refused to sell the land again.

In a few days,   woman was woken up at night by strange sounds and smoke. Someone burned her house! Horrified widow grabbed her children, a box of documents and money and jumped out of the window.  The house with all their property was burned down to the ground.

Poor widow brought a suit to the municipality. The judge, who was bribed by the lord, decided the case not in her favor.  Woman reached the Crown Tribunal. It was the highest authority,  which operated in Lublin in the XVI and XVII centuries. If someone was unhappy with the decision of the Municipal Court, he could appeal the to the Crown Tribunal.

The tribunal began the process of a poor widow with a rich nobleman. The judge, who was involved in the case, made verdict in favor of the lord, unfairly sentenced the widow. Offended woman bitterly cried that if she was convicted of the devil, the sentence would be more fair. In a minute unfamiliar judges in scarlet robes appeared on the stairs. They ordered to open the meeting room and then sat around the table of the presidium and began to examine the case of the widow. One of them acted as defense counsel of accused widow. Scared clerk noticed that sharp features and eyes of judges have something diabolical, and their very black hair hid their horns. In fact, they were demons, whom God sent to repeat the process.

The proceeding began. Prosecutor favorably described the claims of the magnate. A stream of false words was poured. The judges took counsel. A few minutes later horrified clerk heard the verdict in favor of the widow. Jesus on the Christ in the tribunal court cried with bloody tears over human malice, which is worse than satanic, and turned away his head. Chairman of the devil court, in memory of his appearance, put his hand on the table and burned its imprint on the surface.  After approval of the sentence demons quickly left the Tribunal Court.

The next morning the news of the night visit to the Tribunal quickly spread over the town. Crowds gathered on the market. Unfair judges who rushed to the court broke their legs on the stairs of the Tribunal. Seeing it as a manifestation of God’s wrath, priests held solemn worship. There was the ceremonial procession during which the Miraculous Crucifix was transferred to the collegiate chapel.

When two hundred years later it was decided to take apart the Cathedral of St. Michael, the memorable Crucifixion was moved to the main Cathedral, and is still staying there in the Chapel of the Most Holy Sacrament, reminding the faithful ancient miracle in the court hall of the Tribunal.

Do you want to meet our mascot? Check it out on our Instagram!